Who Is Mercedes Guy? 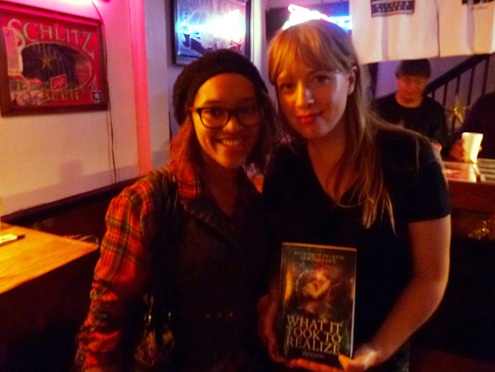 Mercedes Guy is the young adult author of the fantasy What It Took To Realize & Voodoo, inspired by Alexz Johnson's song "Voodoo". She published her book December 5th, 2014; on December 4th she attended Alexz Johnson's concert in Charlotte, NC and gave her the first "proof" copy!

What It Took To Realize & Voodoo takes place in Folly, SC. After working on the story for about 4 years, she had finally finished it in November, a year before publishing in paperback. Once she began the sequel she wanted more than ever to go down to Folly for herself. So finally in the summer of 2014 she went down, and loved the Charleston charm so much she moved a month later.

Out of the Ocean, the second book to her trilogy Daughter Of The Ocean, is in its final stages and upon completion Mercedes plans to start a Kickstarter Campaign to raise money to get the book professionally edited, and get the cover art as well as some promotional gear made.

In addition to working on her baby-- Out Of The Ocean-- inspiration has struck her around every turn and she is now working on at least three other projects! While working fulltime at Arcadia Publishing & The History Press AND going to school for Business Administration. (Because she wants to own her own bookstore someday). On this blog you will be able to read more about her projects, free chapters, and learn what inspires her!
Powered by